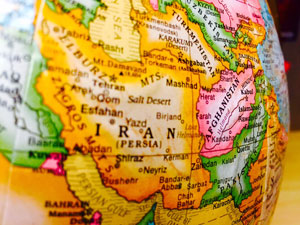 Iran is located in the Middle East, between Iraq and Pakistan, bordering the Gulf of Oman, the Persian Gulf, and the Caspian Sea. Keeping in mind the geography of Iran, Iran ranks sixteenth in size among the various countries of the world. The country covers a total area of 1.648 million Sq. km of which 1.636 million Sq. km is land and 12,000 Sq. km is covered by water. The Coastline of Iran is 2,440 km. Two-thirds of the country is either mountains or deserts. The bordering countries of Iran include Armenia, Azerbaijan, Afghanistan, Pakistan, Turkey, and Turkmenistan. An important aspect of Iran’s geography is the climate of Iran which is mostly arid or semi-arid, featuring a rugged terrain with a mountainous rim; high, central basin with deserts, mountains, and plains.
Another important feature of the geography of Iran is its strategic location on the Persian Gulf and Strait of Hormuz. According to the geography of Iran, The lowest point of Iran is the Caspian Sea – 28 m whereas the highest point is Kuh-e-Damavand (Mount Damavand) at 5,610 m.